Petit Jean Electric Cooperative is here to support you as we overcome the challenges of the COVID-19 pandemic. Learn More

On Jan. 3, Petit Jean Electric employees gathered for a small ceremony to celebrate Bill Bonds’ years of service and to congratulate him on his retirement. Bill worked for Petit Jean for 17 years.

Bill began his career with Petit Jean Electric on Feb. 28, 2005 as a dispatcher. He later worked in right-of-way before moving into the apprentice journeyman program and ended his career as a Lead Lineman. Bill has a rough exterior but a heart of gold, and anyone who had the opportunity to work with him knew this about him. At any given time, Bill was going to give everything he had to help everyone he could. This quality is what made him a good lineman and took him around the world bringing electricity to those that had never had it. Bill made two trips to third-world countries to do just that and would have gone many more times if the opportunity had presented itself.

After 17 years of serving Petit Jean Electric’s membership, Bill plans to change up his daily routine and start a new life chapter. His retirement plans include spending lots of time with his grandchildren and dogs and maybe doing a little hiking and whatever outdoor adventures he can come up with.

“On behalf of the board of directors, employees and members of Petit Jean Electric Cooperative, I thank Bill for his selfless service and dedication to the cooperative,” General Manager/CEO Michael Kirkland said. “While we will miss his knowledge, wit and loyalty, we wish him to have a most blessed retirement.” 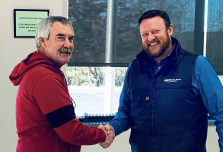